Pregnant and in Recovery: Former Addicts Have Hope! 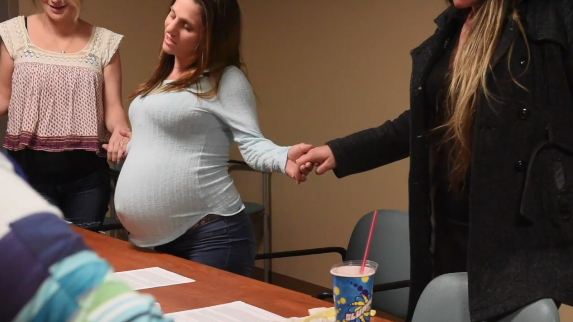 Born to a first-time mother trying to overcome drug addiction, Zilah escaped the screeches, the shakes, the long nights and toxic stomachs that come with Neonatal Abstinence Syndrome — what newborns experience when withdrawing from narcotics their mother took during pregnancy.

She was one of the lucky ones. Cassie Steidtmann, Zilah’s mom, was pregnant when she was arrested for violating her probation for selling heroin to an undercover cop in Cape Coral. She had been using heroin since she moved to Florida nearly four years ago.

Steidtmann was also treated with methadone for 10 days, but stayed clean for four months before Zilah was born. If a pregnant woman uses opioids, tries to treat her addiction with substances like methadone, or even takes caffeine or nicotine, her baby is at risk for NAS symptoms.

She turned to a new kind of support group in Sarasota for pregnant recovering women, one that offers something anonymous addict groups don’t: the security of sharing struggles and successes of recovery in the same breath as thoughts on pregnancy, motherhood and relationships.

Although Steidtmann attended just one of the meetings before Zilah came into her life, she wishes there were more like it.

“I think there needs to be more support in the community for pregnant women who are addicted,” she said.

At Sarasota Memorial Hospital, 114 of the 3,622 babies had NAS diagnoses in 2016, the most recent data. Sarasota County’s rate of NAS in newborns has steadily climbed since 2007 and is currently at its highest. In Manatee County, 70 babies of the 2,497 born were diagnosed with NAS. The highest rate of NAS was in Volusia County, where nearly one in 10 babies born in 2016 had this diagnosis.

Sarasota doctors are rethinking how they interact with pregnant women who are recovering from addiction. They’re not sure what they’re doing will have an effect on overall NAS diagnoses, but they hope it will make a positive difference for mother and baby.

“We wanted to explore how our patients were being taken care of — how the addicted, pregnant patient was taken care of,” said Hill, an obstetrician-gynecologist and maternal-fetal medicine specialist with the Florida Department of Health in Sarasota County.

ASAP meets once a month to network and collaborate on all factors of an addicted pregnant woman’s life: from mental health, addiction services, children’s services, family planning and the judicial system, to name a few. Hill has helped start similar discussions in Manatee County.

Because of the coalition, Sarasota Memorial Hospital began offering special tours of the labor and delivery unit so recovering mothers could meet staff.

“Judgment here is out the door,” said Hedstrom, an obstetrician-gynecologist with First Physicians Group who leads the weekly meetings that began in October.

Some addicted women who become pregnant believe they can stop using drugs right before giving birth, not knowing the risks of their continued use of illegal substances or the harsh reality of withdrawal, Hedstrom said.

Read more: Narcotics will be tougher to get in these Manatee emergency rooms

“Addiction is a disease. It’s like any other disease,” she said. “Once you’re using that drug, of course your brain is sort of hijacked.”

It’s too soon to know if their work is affecting NAS rates. But giving these women the tools and knowledge to succeed in their recovery and motherhood is the goal.

“We might not impact NAS directly … I think what we can impact is their quality of life,” Hedstrom said.

A lullaby cut the silence of the quiet hospital floor, sweetly announcing over the intercom the arrival of another baby into the world. In a classroom on the fourth floor, the same as the labor and delivery unit, a plate of sliced grapefruit and oranges sat on the table as a snack. The fruit’s aroma filled the air.

The focus of the support group meeting on a recent Thursday evening would be about “bad apples.”

After five minutes of silent meditation, one by one, each of the four soon-to-be mothers followed a prompt written in green dry-erase marker:

What challenged me today?

I am grateful for…

This is a place where recovering pregnant women can talk freely about their recovery and their pregnancy. It was unique from their usual experience at Narcotics Anonymous or Alcoholics Anonymous in that there was a true freedom from judgment. (Three women gave the Bradenton Herald permission to sit in on one of their meetings and share their stories.)

Angelica Bell learned she was pregnant when she was arrested for stealing video game controllers to resell for drug money.

“If you’re eight months’ pregnant and you walk into a meeting and then you pick up a 60-day key tag, there’s unfortunately, even in NA or AA, there’s a lot of judgment going on,” Bell said.

Bell, Antoinette Grant and Shelby Phillips, all 27, are each in different parts of their pregnancies and recovery from use of opioids — or more frankly, as they put it, whatever they could get their hands on.

The “bad apples” in their lives took the form of strangers, of loved ones, of fellow recovering addicts.

Read more: Carfentanil killed more people per capita in Manatee County than anywhere else in Florida

The trio talked about dealing with anger, challenges with communication and how they overcome the everyday pressure that one slip-up would undo all the hard work that staying sober requires.

“I was the bad apple. I was the one, I was the bad apple in my family …. Every time I came around, it was just like negativity, always drama, huge problems,” Grant said. “Now being on the sober side of things, it’s just like, ‘How many times can I try to help before it’s like you’re hindering me?’ I don’t know what I can say about bad apples, but you should make applesauce.”

Through recovery, Grant said she finds herself getting easily frustrated with others, and wondering why.

“It makes it reflect back on yourself. Can people see the difference in me as well?” she thought aloud. “Is there away to change a bad apple into a good one? How do you go around those same people when you have that reputation of being a bad apple?”

Grant chose to give her second child to an adoptive family.

“It’s weird doing an adoption when you have a 5-year-old at home,” she said. “It’s not the fact of whether I can be a mom or not, it’s what I’m searching for in life.”

Bell lost custody of her first child, who she had while she was using drugs. She tested positive for Oxycodone. He didn’t. She’s working to gain a relationship, albeit strained.

Phillips also lost custody of her firstborn because she fell hard into her addiction. She gets to see her daughter at church on Sundays, living with a family she knows and trusts.

“Now that I’ve accepted the fact that I don’t get to raise her and all that, now I have my life back and I get this second chance,” Philips said. “This time around I can (fall back into addiction), but it’s not an option for me. I refuse to let this happen again.”

The common room of the Mothers and Infants program at First Step of Sarasota bursts full of baby pink. Steidtmann and Ryan Burlew, 35, sat in waiting-room chairs while cradling their newborns, Zilah and 1-month-old Jax, respectively.

First Step’s Mothers and Infants program is a 17-bed in-patient facility where recovering mothers can stay with their children for up to a year, but on average stay between four and six months, says Nancy Page, vice president of clinical practices. Over the 20 years of its inception, nearly 434 babies have been born drug-free, including Zilah and Jax.

Read more: New Florida opioids law limits how many painkillers you can have

“It keeps the family together,” Page said. “It’s all about family preservation. That’s what you want to do.”

Like Steidtmann, Burlew had violated her probation. Addicted to pills, meth and marijuana, which she used during her pregnancy, Burlew falsified her mandated urine tests with a concoction of Mountain Dew and water.

Burlew, also a new mother, was in jail for the majority of her pregnancy. She wouldn’t have known First Step even existed had she not gone to jail, and she doesn’t think that she would have gone into recovery.

“When I got released was the day before he was born,” she said. Facing 30 months in prison, she says she was released “at the mercy of the judge.” She never had anything to lose before Jax, now bouncing in her lap.

Each day, the women take part in parenting or relationship classes from community partners, followed by assignments for their recovery. They participate in Narcotics Anonymous or Alcoholics Anonymous or Cocaine Anonymous, and then meditation in the evenings.

Women can come to First Step through referral from the judicial system or voluntarily. With such limited space, Page said they make sure the women are referred elsewhere when they run out of rooms.

“They don’t get ignored, that’s for sure,” Page said.

Both Steidtmann and Burlew had so much to gain from being at First Step, as they’ll learn the skills they need entering motherhood for the first time. Once they leave First Step, they hope to go home to stay with their parents after finishing their program at First Step, pending court approval. Then they have to go through required drug court.

Zilah relaxed in her mother’s arms, wrapped in a soft blanket adorned with cartoon butterflies. The baby’s eyes were closed, crinkling occasionally when a smile bubbled across her face.

“I literally don’t think I could have stayed this clean or had so much motivation to be clean if I wasn’t going to have her,” Steidtmann said. “I think she saved my life.”

This story was written by Hanna Morse (hemorse@bradenton.com) and appeared originally on the Bradenton Herald website.